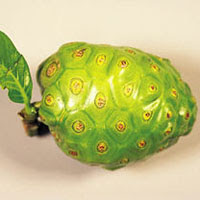 In my previous posts before, I have been mentioning different herbs that can help us to stay healthy. Now, I am introducing another herb. It’s called the India Mulberry with the scientific name Morinda Citrofolia Linn or commonly called as “noni.”

This herb can help a person in many ways. It can help stimulate and boost the immune system by encouraging the production of the T-cells that restrain the development of tumor and cancer cells. This herb also contains the phytonutrient proxenine which, along with proxeronase and serotonin (brain neurotransmitter that carries oxygen), is converted to xeronine and helps damaged cells to regulate their function and make possible repair. It also has scopoletin which, combined with serotonin, dilates previously contracted blood vessels resulting in the normalization of blood pressure.

Since it has a very unsavory taste, most of the companies have developed a way to bottle this herb and combine it others. They have altered the odor and the taste. Some also tried to extract it and sold it in capsule form. They have been sold to the public as a health supplement.

One thought on “Indian Mulberry”